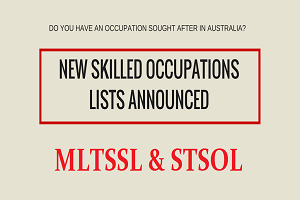 Confirmed by DIBP, the changes to occupations on 19 Apr 2017 or July 1 2017 do not impact applications in the Temporary Residence Transition (TRT) stream of the Employer Nomination Scheme (ENS) or Regional Skilled Migration Scheme (RSMS) visa programs. This is because eligibility is based on the nominee’s subclass 457 history, not whether or not their occupation is ‘on the list’.